Let me tell you about the flowers and the trees…..here in Australia, its spring! And for approximately 1 in 5 people, that means its also the worst time of the year for hay fever!

Hay fever is an allergic condition, where the eyes and the mucous membranes of the nose become irritated and inflamed after coming into contact with environmental allergens, such as dust mites, mould and animal hair…..as well as pollens produced by grasses, trees and weeds. This inflammation occurs when the body produces and releases histamine as an immune response to pollen exposure. While some people only suffer hay fever symptoms over the warmer months as a result of the increased amount of pollen in the air, many are actually affected all year round. 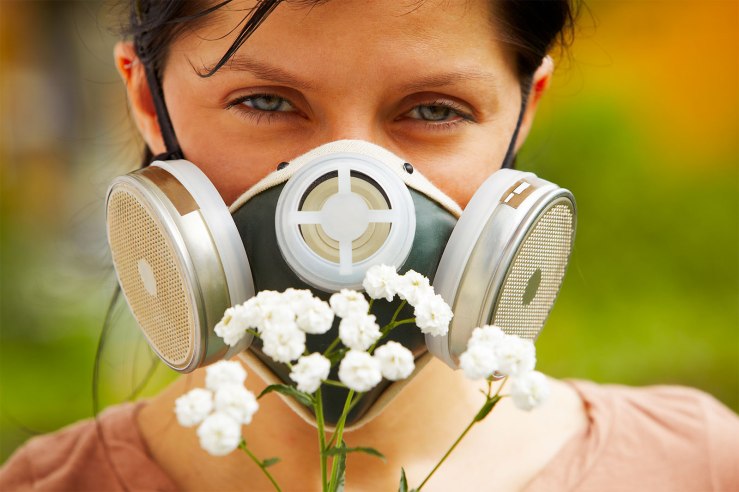 Sufferers of hay fever typically experience watery eyes and an itchy, runny nose, which can result in frequent sneezing. Some people also suffer itchy skin, or hives, as a result of their hay fever. These symptoms can be fairly mild, having no real effect on day to day life other than slight discomfort. But they can also be quite severe, resulting in sleep disturbance, poor concentration, daytime tiredness and lethargy, headaches, and the possibility of sinus infections.

Those who suffer from hay fever will know of the general discomfort it causes. If symptoms are mild, this discomfort is the only real effect it will have on your day to day activities, as well as your sporting endeavours. However, for anybody who experiences moderate to severe hay fever, it can cause some problems.

Sleeping difficulties leading to daytime tiredness and lethargy can affect your body’s ability to perform at its best; while ongoing headaches and poor concentration can also have a negative effect on your physical activities. Increased mucus production in the sinuses can also lead to problems. A small excess can lead to your sinuses being blocked, which can have an effect on your breathing. When a larger amount of mucus is produced, it can run down the back of your nose and build up on your throat. This can cause severe coughing, as well as have a bit of an impact on your breathing, which is not a help if you are trying to exercise.

For those suffering with asthma, hay fever can also make your asthma flare up, causing breathing difficulties. During spring and summer, many asthmatics find that as a result of hay fever, their asthma seems to become worse, and they need to increase the dose and frequency of their asthma treatments.

So what can we do to help minimise the symptoms caused by hay fever? Well, there are actually quite a few options!

Of the newer, second generation anti-histamines, three are commonly used and recommended…..fexofenadine (Telfast®), loratadine (Claratyne®) and cetirizine (Zyrtec®). Desloratadine (Aerius®) also exists, which is actually an active metabolite of loratadine and is not as popular as the other three. Anti-histamine tablets will usually start relieving your hay fever symptoms within about 30 minutes of being taken, and typically last for a 24 hour period.

There are also a few anti-histamine nasal sprays on the market. These are designed to be sprayed into the nose, where they can exert their effects directly, and act a bit more quickly than tablets…..usually within 10-15 minutes. Ultimately, they should have the same effect as anti-histamine tablets, but some people prefer to use a nasal spray instead of taking a tablet.

Some anti-histamines are also available in the form of eye drops. People who suffer from red, itchy eyes as a result of their hay fever may benefit from these, as they have a direct effect on the eyes. Usually, people use these sort of drops in addition to tablets or sprays, on those days which they find their hay fever to be particularly bad.

Anti-histamine tablets and sprays do not necessarily have to be taken every day…..they are more used to relieve your symptoms when they appear. If your hay fever is only mild, you there may be times during the season where your symptoms aren’t as bad as other days, and you may find you can tolerate these times without the need of any tablets.

Steroid based nasal sprays contain glucocorticosteroids, which provide anti-inflammatory effects to act against the symptoms of hay fever. Quite a few steroidal nasal sprays exist, including mometasone (Nasonex®), beclomethasone (Beconase®), triamcinolone (Telnase®), budesonide (Rhinocort®)  and fluticasone (Flixonase®) to name a few. They usually last either 12 or 24 hours, so they usually need to be used either once or twice a day (depending on which one you are using).

Like anti-histamines, no one steroid spray is better than any of the others. Some are only available on prescription, while others are readily available over the counter. Again, it is quite simply a matter of trial and error to find which one will work most effectively for each individual.

Unlike anti-histamines, these types of sprays don’t work straight away, and need to be used regularly to be effective. Usually, they need to be used for about 3-4 days to allow the medication to build up before they begin to work properly; and you have to keep using them on a daily basis to get the most benefit out of them. Once they start working, they usually prevent your hay fever symptoms from showing up and bothering you. But be sure not to use them year round without a break…..over a long period of time, these types of nasal sprays can damage the lining of your sinuses, causing dryness, crusting and nose bleeds. Typically, they can be used for a 3-6 month period without any issues, but any longer than that and you should consider having a break from using them for a while.

Decongestant tablets containing phenylephrine and pseudoephedrine* are available, either as single ingredient, combined with pain relievers, or combined with anti-histamines. Decongestant sprays, containing oxymetazoline, are also readily available over the counter. Both of these types of decongestants are designed to constrict blood vessels and reduce blood flow to the sinuses, which can relieve inflammation and reduce secretions of mucus….meaning they can help stop your nose running!

Saline nasal sprays are also an option for those who find their sinuses are constantly blocked due to hay fever. These sprays act as a rinse, to flush out excess mucus. Many people find it beneficial to use saline sprays before their daily (or twice daily) nasal steroid spray, as it can help to maximise the benefits of the steroid sprays.

For a worst case scenario, if your hay fever is unbearable and none of the above treatments work for you at all, you may be able to speak to your doctor about receiving a steroid injection to keep your symptoms under control. These are an absolute last resort and these types of injections are not suitable for everybody, but for some people, its worth having a chat to your GP about.

Of course, there is also the avoidance technique. Work out what causes your hay fever symptoms to flare up, and simply stay away from it……but this is kind of hard to do, especially if you like to get outdoors to exercise and play sports on a regular basis!

BUT WHAT SHOULD YOU USE?

Really, it depends on the individual. Some people don’t like the idea of taking tablets, while others don’t like spraying anything up their nose! It also depends on how bad your hay fever symptoms are. Some individuals may find that their symptoms are only very mild, and they can get away with taking an anti-histamine tablet every now and then; while others may find they need to use a combination of treatments to keep their symptoms under control.

If you suffer from hay fever symptoms on a daily basis, you might like to try using a steroid nasal spray to keep your symptoms under control; and then have anti-histamine tablets on hand for days where the pollen count is particularly high, as you may get a flare-up of your symptoms at times. Obviously, this is not the solution for everybody, but it is a good option for keeping your hay fever at bay.

Its also a good idea to keep an eye on weather forecasts, and check the pollen count for the next day. This way, you will know when your hay fever symptoms might be a bit worse, allowing you to be a bit better prepared, especially if you are heading out exercising.

For the competitive athletes out there, you have no real need to worry in regards to your treatment options being safe in sport. Anti histamine tablets and sprays are able to be used, as are decongestant tablets containing phenylephrine. Anything with pseudoephedrine is a bit of a risk, as this ingredient is banned for use in competitive sports (although you are able to take it outside of competition). Decongestant sprays are okay to use; and steroid based nasal sprays are also safe to use, as long as the steroids involved are only being administered nasally. The steroid injections some people resort to are found on the banned list, so if you require one of these to control your hay fever, you will need to apply for a Therapeutic Use Exemption. To be on the safe side, it is always best to check your substances for yourself!

With so many treatment options available, there is no need for your hay fever to stop you from living your life. By keeping your hay fever symptoms under control, you will be able to head outside in the spring weather to enjoy the activities and sports that you love without any problems!

*due to its use in the manufacture of illicit substances, and its potential for abuse, many pharmacies do not stock any products containing pseudoephedrine. State legislation may also require a valid form of identification to be presented and recorded for the sale of any pseudoephedrine containing product